Our parents would tell us how certain foods (i.e. durian, goreng pisang, chocolate, etc) can result in us feeling heaty, leading to sore throats. Ever wondered if this advice is medically proven?

There is a scientific explanation of why certain foods can cause sore throats. The explanation however is not because of the “heaty” nature, rather the explanation is closely associated with gastric reflux. The medical condition of why one may get a sore throat after eating fried food is Laryngopharyngeal reflux (LPR).

What is laryngopharyngeal reflux (LPR)?

LPR is defined as a backflow of stomach contents to the larynx (voice box) and pharynx (throat). (See Image 1) The contents of the stomach is usually acidic in nature, the back flow of which causes damage to the tissues of the voice box and throat causing two of its common symptoms of a loss of voice and sore throat. 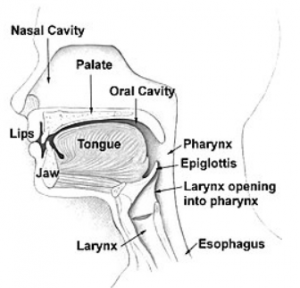 Image 1. A drawing of the anatomy involving the Pharynx, Larynx and Esophagus. (Resource: Wikipedia)

Is laryngopharyngeal reflux the same as gastroesophageal reflux disease (GERD)?

GERD, or as we commonly term gastric reflux shares similar pathology with LPR. The difference is that the reflux of the stomach content reaches and causes tissue damage at the esophagus (food pipe) (Refer to image 1).

Different symptoms: How do I know if I have LPR or GERD?

How do I prevent LPR?

Are there medicines to treat LPR?

Addressing the myth “drinking lots of water reduces the effect of heaty food and sore throat will go away.”

Although hydration is vital for your overall wellbeing, as stated in point 4 and 5, drinking lots of water is not associated in preventing and treating the sore throat associated with LPR.

Many are not aware of the condition LPR. Yet, the scientific explanation of LPR fits nicely to the advice our parents give when they say “don’t eat so much fried food, you are going to get a sore throat!”.